Coffee culture— doesn’t that sound cool? But I could take cool to the next level and spell that with a “K”—Koffee Kulture. It would be uber cool but not very original.
So what’s the big deal about coffee ? What is the appeal? What makes it the world’s second most traded commodity after oil ? What makes it the world’s favourite beverage? Is it the aroma or the flavor? Is it the eye-opening stimulatory effects aka the Kick? Is it the social appeal? It’s probably all of the above, and much more.

Coffee is the most versatile beverage in the world. You can have it mouth burning hot or so cold that it’s almost frozen. You can use it to warm the cockles of your heart or to freeze your toes off ( I am using a politer version of the expression ). It can be drunk on its own (Americano) , or with the addition of milk , cream, sugar, lemon, cardamom, chocolate, cocoa; you name it.

Like any major culture, coffee culture has a language of its own. Espresso, Cappuccino , Americano, Macchiatto, Latte, Frappe: you need to speak the lingo if you are to get what you want. I experienced this first hand many many moons ago when I was not fluent in “ Coffeespeak”. I was attempting to grab a cup of coffee from a vending machine at the London Zoo, and like the paindoo (peasant) that I am, I pressed the button labeled ’ coffee’. When the foam settled on my tall paper cup, I was dismayed to find that I had ended up with half a litre of black coffee. I soon realized that I should have pressed the one labeled ‘latte’ to get the café au lait (coffee with milk) that I wanted. 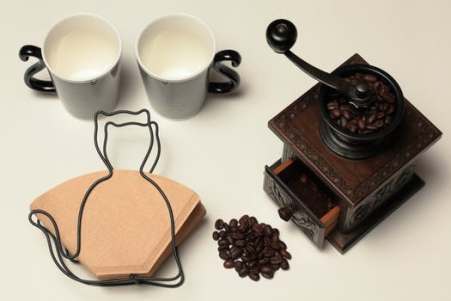 Perhaps half the fun of coffee is in the accoutrements – how I love that word. Accoutrements or equipment for coffee is so multitudinous that listing it would fill a small book. Fancy new coffee machines like the Nespresso or the Cappuccino machine, older models like the Percolator, special coffee pots like the Cafetière and the Mocca pot —- to name just a few. Vessels to drink coffee in —- ranging in size from the miniscule gold-rimmed vintage coffee cups to towering mugs suitable for the tallest latte. Coffee grinders, coffee measuring spoons and fancy caddies make up the rest of the coffee armamentarium.

The big international coffee chains contribute to the global coffee culture. Their bars/cafes are a far cry from the Arab and Turkish coffee shops of long ago or the London Coffee Houses of the 18th century. Perhaps the most popular coffee chain in the world is Starbucks. Named after the coffee drinking character in Moby Dick, it has outlets in 60 countries. Café Nero, Second Cup, Espresso etc are other chains with an international presence. All these international brands have outlets that are responsible for the lovely aroma of coffee that pervades international airport lounges.

Over the past few decades, Western urban life has seen the emergence of the yuppie coffee habit where no one has breakfast at home anymore and everyone buys coffee and bagels on their way to work. Not to be left behind, yuppies in Pakistan are catching on fast. Beginning the day with expensive coffee is a habit not just confined to yuppies : even smart young Pakistani housewives prefer to go out to their nearest Gloria Jeans or Hotspot or Costa and buy their morning cup of joe ( even though they have more than enough time to brew it at home). Innumerable cafes have sprung up like mushrooms all over the major cities of Pakistan. They are basically hang outs of rich kids as well as the not so rich but aspiring to be.

Whether you stir up a mug of instant cappuccino at home, or fork out the equivalent of two or three dollars on designer coffee, you are rewarded with its stimulant effect. In this age of excess, the constant race to have more makes coffee essential because it enables us to do more. It enables us to go into overdrive and pull all nighters before that deadline, that presentation or that exam. So those Sufi saints in Yemen who used coffee to keep them awake for their nightly devotions knew their stuff.

The appeal of coffee is universal. The West has embraced coffee and made it its own so that the world has forgotten that it began in the Arab world and then was propagated by the Turks as they conquered Europe. East or West, coffee is the world’s second most trade commodity after oil. Something like four or five billion cups of coffee are consumed worldwide every day.. Small wonder then, that it has spawned a culture of its own.
So, are you part of the “ culture” ?