CHEF is a movie written and directed and produced  by Jon Favreaux. He also plays the main role.

Chef Carl is the living force behind the popularity of a Los Angeles restaurant. Like most creative people, he wants to make some innovations in the menu. The restaurant owner (played by Dustin Hoffman) does not want to take any chances by serving new dishes.

The falling out with the owner is followed by an altercation with a food critic. Carl has a mega melt down which is filmed by people in the restaurant. The video  goes viral on the web.

Carl throws in the towel and gets a food truck instead. The rest of the movie is about Carl setting up the new business helped by his son and another chef who also quits the restaurant to join them.

There are no plot twists in this movie. There are several well photographed cooking scenes that make you want to cook or at least eat. The film explores several current issues. The chef’s ex-wife and current girl friend provide a bit of variety . 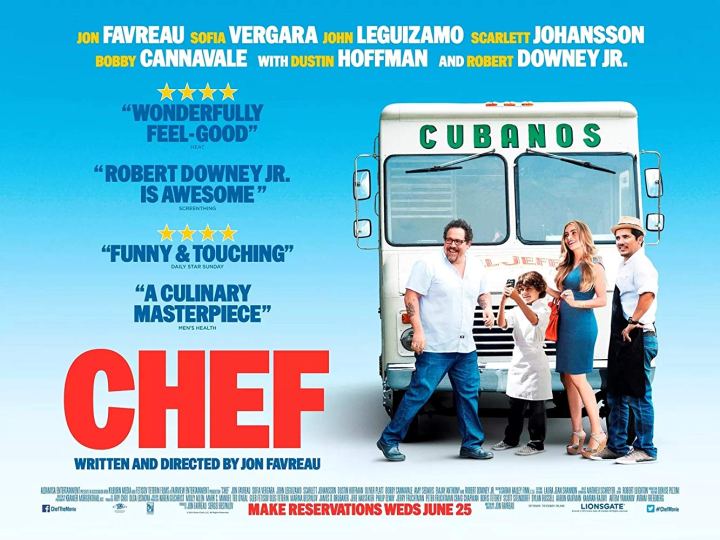 The main actor here is Jon Favreau, of course, who plays Chef Carl. Several Hollywood big names provide a constellation of stars to Favreau’s moon. Dustin Hoffman, as the restaurant owner, has a brief but powerful role. Robert Downey Jr. has an even shorter role–he is there in one powerful scene. Lovely ladies Sofia Vergara and Scarlet Johansenn play Carl’s supportive ex-wife and equally supportive girl friend.

The movie addresses the centuries’ old debate of creativity versus commercialism. Chef Carl wants to create new dishes; his restaurant owner is wary of making any experiments that could rock his very lucrative boat. He tells Carl,”Be an artist on your own time”.

This issue has plagued artists and  writers over the ages. It holds true for anyone doing something new in any field. The person who manages to find the balance between the creativity and commercialism is ultimately successful.

A thread that runs throughout the movie is Carl’s relationship with his ten year old son. Carl is obliged to care for him for part of the week like any divorced dad. The father and son relationship portrayed is very real, with Carl sometimes shouting at his son, sometimes showing affection, and always expecting a lot from him. His son, in turn, teaches him about Social Media.

This movie is a good example of the influence of social media on our lives. When the video of Carl’s outburst over the food critic goes viral, he is so embarrassed that he wants it taken off the web and is mortified to learn that it can’t be done. Later he is pleasantly surprised by a cop who recognises him from the video and wants pictures taken with him.

When you fall, get up, dust yourself off and start again–with something new and even better.This is the message of CHEF.

What CHEF lacks in story, it makes up in food cinematography: both images and sound. As you watch and hear the sizzling, crackling, cutting and chopping sounds, you can work up a huge apetite. Caveat—this movie is not a good idea for those on a diet–it might make them want to cheat.

To watch the Official Trailer of CHEF click here.