Baked Alaska is probably the most spectacular ice cream based dessert ever. It is a culinary  feat as well as a lesson in Physics. It consists of ice cream covered with meringue mixture that has been browned for a brief time in a very hot oven. The meringue, a mixture of well beaten egg whites and sugar, acts as a poor conductor of heat. It bakes itself but allows the ice cream inside it to remain frozen. This fact, that some substances are poor conductors of heat was demonstrated in this way by physicist Benjamin Ruthford as early as 1804. 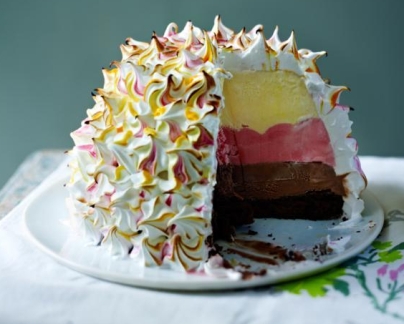 Several versions of this dessert were popular in the 19th century. President Thomas Jefferson served it at White House banquets in the form of frozen balls of ice cream covered with a hot pastry crust. It was popular also in Queen Victoria’s court as well as with French royalty.

A close cousin of the Baked Alaska is the Ice cream Bombe. This is a round or dome shaped dessert consisting of a thin layer of sponge cake containing ice cream. The bombe can then be covered with a layer of meringue, whipped cream or chocolate.

The Ice cream Cake, like the bombe, is a variable combination of sponge cake and ice cream. It can be made like a swiss roll, with ice cream spread over a thin layer of sponge cake and then rolled up. Any order of ice cream and cake can do. The cake can go at the bottom as in a trifle or it can be placed on top of the ice cream. It is customary to envelop the whole concoction in whipped cream or buttercream before decorating.

These ice cream and cake creations look spectacular when sliced. The taste is quite spectacular too, especially during summer parties.

Photo by Harnish Ganatra on Unsplash

Enough with the spectacular: let’s move on to something simpler. What can be simpler than the Ice cream Float. It is thought that the first ice cream float was made by American Mc Cay Green. He was serving sodas in his shop when he ran out of ice. Necessity being the proverbial mother of invention, he added a scoop of ice cream to each drink to keep it cold. Voila! The ice cream float was born.

Several American cities/states claim to be the birthplace of the Ice cream Sundae. My favourite is Twin Rivers, Wisonsin, where the selling of sodas, whether as ice cream floats or plain was prohibited on Sunday. To retain their clientele while remaining within the ?loop of the law, business owners invented a new ice cream treat. They placed scoops of ice cream in tall glasses (probably the ones for the ice cream floats) and topped them with flavoured syrup. This new treat, was appropriately named the “Sunday”. Later, out of respect to religious sentiment the spellings were changed to ‘Sundae’.

Sundaes can be made in many combinations with a variety of fruits and ice cream flavours. The banana split and peach melba are to examples. Toppings such as sprinkles, nuts, salted caramel, crushed caramel and jelly beans can all be added to these frozen treats.

What is your favourite ice cream treat?

Do you have an ice cream story or some ice cream trivia to share?

Do let me know in the comments section below.

23 thoughts on “Fun Things To Do With Ice cream: Sundaes, Floats And More”