A series documenting the ongoing saga of mankind’s relationship with coffee.

But first, picture this:

Scenario 1 : You are sitting in your tiny cubicle at work. It is a hot, humid afternoon and the air conditioning isn’t working. It’s four pm and you have to hand in your report at five. Life isn’t fair: you did not even take a break for lunch, subsisting on a bag of crisps and two cereal bars. Your brain isn’t working: how can it in this heat?

Just as you have reached the depths of despair, your angelic co-worker barges in (doesn’t everyone wish for angelic co-workers? not everyone gets them). The angel in human form hands you a tall takeaway glass with a straw,” Cold brew coffee, no sugar. Just the way you like it,” she says. 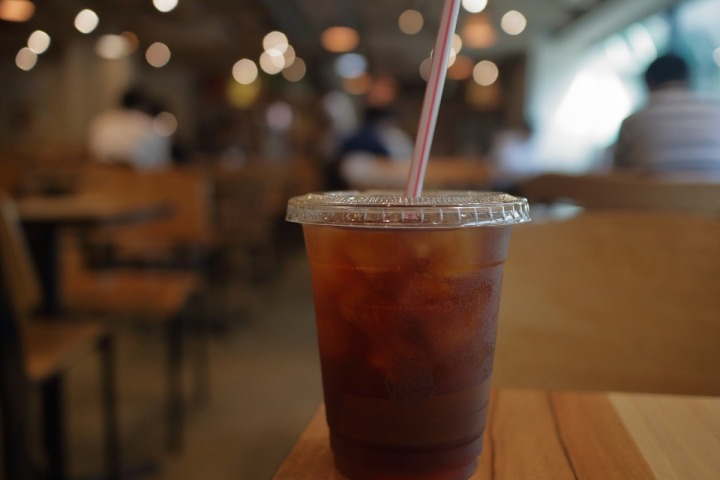 You take a long sip, take a deep breath, then another sip. Suddenly the world spins into focus. Your brain races, your heart pounds, and you attack your computer keyboard. In twenty minutes flat you punch out a 500 word report that had been on your nerves since morning.

Scenario 2: It is the first week of June. Your last exam is tomorrow..It is a Physics paper. Who even holds exams in June? It’s so difficult studying for the last exam. Why did it have to be Physics? You hate Physics anyway, but a good grade is important. Half your revision is left but your brain feels like mush already. If only it were not so hot, you could fix yourself a cup of coffee and get on with it…..grumble……grumble…..grumble

Suddenly, inspiration strikes, you go to the kitchen, rummage through the cupboards and find a Mason jar. You fill it half full with ice, add two teaspoons of instant coffee, two teaspoons of brown sugar and a glass of milk. Now you screw the lid on the jar and give it a few shakes. This Mason jar of iced latte helps you through the rest of your Physics revision on that sweltering June afternoon.

Scenario 3: It is a rainy weekend in December. you are curled up in bed reading a gripping whodunnit (maybe Silkworm by J.K. Rowling writing as Robert Galbraith). It’s only six in the evening but the days are so short that it is pitch dark outside. You can’t see the rain which is, however,making its presence felt by constant hammering on the windowpanes. The gas fire burns quietly in the corner

It is pretty cold outside but you are warm under your duvet. Life is perfect. What more could you want, except perhaps a steaming mug of coffee? What could be better than hot coffee on a cold winter evening? How about an ice cold frappaccino while you are snugly in bed? Oooh ! That sounds like absolute bliss.

So what do you do? You could get out of bed and drive  down to your nearest cafe (a block away) for your frappe. What?!! In the rain? Unthinkable!

Or you could get out of bed, go to the kitchen, and try fixing it yourself. What?! so the bed gets cold meanwhile? No way!! If you want to stay warm in your bed, you must become resigned to your coffee-less condition.Yes, looks like it (sigh).

Wait, what about that espresso ice cream in the freezer? Yesss! That is the answer! You quickly jump out of bed, scoop some of that espresso ice cream into a large mug and rush back to your warm cocoon and your mystery novel. The ice cream melts and you slowly sip your improvised frappe Detective Cormoran Strike looks for clues, sheer bliss! What more could one wish for on a rainy December evening?

Okay, Okay. Enough scenarios. Let’s get down to business.

There was a time when cold coffee in my part of the world meant a tall, narrow glass of creamy milky coffee topped with a scoop of ice cream. In addition to a drinking straw, this was accompanied by an extra long handled teaspoon. This allowed you to stir your drink, or get at any ice cream that escaped to the bottom of the glass. For true coffee lovers the ice cream had to be coffee flavoured but you could also have the flavour of your choice. Some ice cream shops or restaurants did not bother with the coffee at all. They just blended a scoop of coffee ice cream in an electric mixer and added another scoop on top—a put off for true blue coffee enthusiasts. With the arrival of the international coffee shop chains, our cold coffee tastes became more sophisticated, increasing the strength of the coffee and, at times, doing away with the ice cream.

Iced coffee or iced latte (there is a difference between coffee and latte: check out my post Coffee Culture) can be made milder or stronger to suit your taste. Milk, sugar or cream is added and of course lots and lots of ice.

Plain old iced coffee can be made fancier and turned into Caramel, Hazelnut, Mint, Orange or Strawberry just by the addition of the right syrup. Iced Mocha is of course a heavenly combination of chocolate and iced coffee.

If you find plain iced coffee bitter but don’t want to add milk or sugar, a new option has emerged. Cold brew coffee has a milder taste and is less acidic than conventional iced coffee while losing none of the flavour and aroma.

Just like hot coffee, cold coffee can also be adapted to Paleo and Keto diets. Just replace the milk with coconut milk, almond milk and coconut oil and you hae your Paleo iced coffee.

Frappe is a cold coffee for those who don’t mind sugar. Made by frothing instant coffee and sugar and then adding water or milk, frappe is very popular in Greece. It was invented in 1957 by a Greek employee of the Nescafe coffee company. It has very little caffeine and is for those who want a sweet creamy coffee flavoured drink.

Frappe was taken to the next level by another coffee company, Coffee Connection who invented the Frappuccino. As the name suggests, it is a hybrid of frappe and cappuccino. When modern coffee giant Starbucks bought Coffee Connection, they also trademarked the Frappuccino.The frappuccino is a frappe with the addition of brewed coffee and a topping of whipped cream—yum–yum! Like iced latte, it can be given any flavour with the addition of the right syrup.

Iced macchiatto is a cold coffee that is fancy in name as well as appearance. Macchiato means mark or stain in Italian and refers to the marbled or variegated appearance of this drink. Flavoured syrup and milk are layered in a tall glass which is then almost filled with ice. As the coffee trickles down through the ice and milk, it creates a lovely stained effect : hence macchiatto.

Cold coffee has been around since the 19th century, making its debut in Algeria and then taking Italy by storm. Cold coffee or iced coffee (cold coffee with ice) is now popular the world over with slight variations according to local tastes.

In Australia it is served with ice cream and whipped cream making it more of a milk shake than coffee. The German Eiskaffe or Eiscafe is similar. In Canada, Iced Cappuccino or Iced Capps as they are fondly called are very popular.

The Italians have several different iced coffee types. Cafe Freddo is cold espresso served as an icy slush. Affogato, espresso poured over a scoop of vanilla gelato or ice cream is more of a dessert than a drink

Asians prefer their coffee sweter and creamier. However, I was in Seoul’s corporate and financial district last year and can testify to the popularity of Iced Americano with South Koreans. Sweetened with sugar syrup, this cold black coffee forms the bulk of sales inthe myriad coffee shops dotted all over the city.

In Japan, cold coffee is served with gum syrup and milk. In Thailand it is flavoured with cardamom, cinnamon and anise.

Iced coffee can be enjoyed with or without milk. It can be had unsweetened or sweetened with sugar, raw sugar, caramel, honey or artificial sweetener. For those who don’t like their coffee too strong, cold brew and decaffeinated coffee are good qptions.

Iced latte, Iced Americano, frozen cappuccino, frappe, frappuccino, cold brew, whatever. There is no better pick me up than cold coffee on a hot summer day.

What is your favourite kind of iced coffee? How do you make it? Or where do you buy it? I would love to know about it in the comments section below.

I would greatly appreciate it if you:

If you liked this piece, you might also enjoy: